THESE BROS. REALLY PUMP UP THE JAMS... Too bad their music is way better than their platforming!

When it comes to videogames and music, there's a whole lot of brothers going on. Whether it's the Chemical Brothers, Dust Brothers, or Mario Brothers - they all do their own thing, with loads of style! 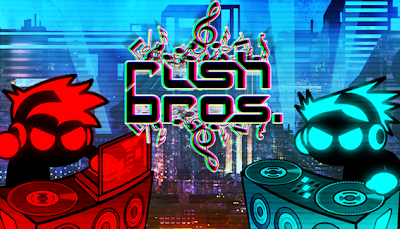 So along comes Rush Bros. a musical indie platform racer, that tries it's best to fuse the best of both worlds (music and platforming), taking inspiration from music rhythm games, platformers like Super Meat Boy, and a healthy dose of psychedelic eye-candy, to really mess with your head. 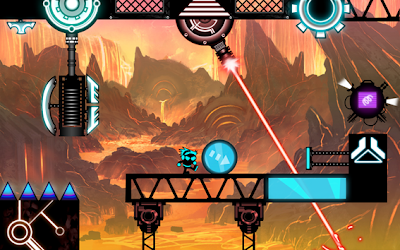 The results are a bit of a mish-mash that never totally gels, but that said, there's still quite a bit of fun to be had, particularly in the multiplayer modes. Some of the highlights from Rush Bros. include a brilliant soundtrack by Infected Mushroom, large trap infested levels sporting spikes and buzz saws, not to mention, some genuinely great looking visuals that suit the techno vibe. 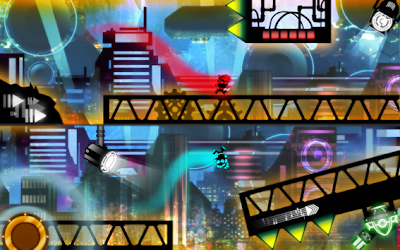 But alas, Rush Bros. never quite hits the mark. While the music is awesome, the platform gameplay is lackluster and somewhat repetitive. For all of the cool ideas and potential that Rush Bros. had, it could have been oh so much better. As it stands, it's an average platformer, that happens to have an exceptional soundtrack. 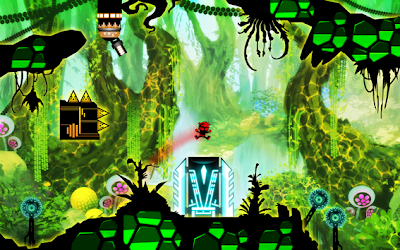 All in all, it's a game that's far more enjoyable to listen to than play. That said, the experience does get a whole lot better when playing with friends. The good news is the price. Rush Bros. can be purchased in a 2-Pack Bundle for $14.99 via Steam. Pretty good value if you wanna go head to head against some real-world rivals... 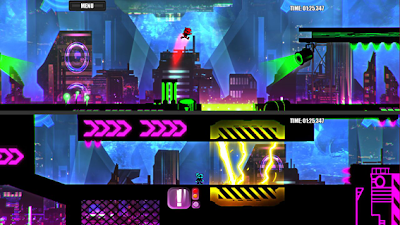 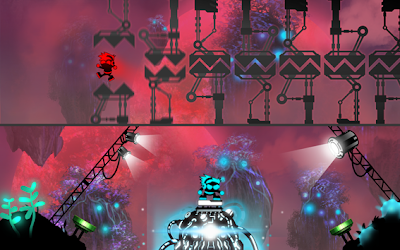 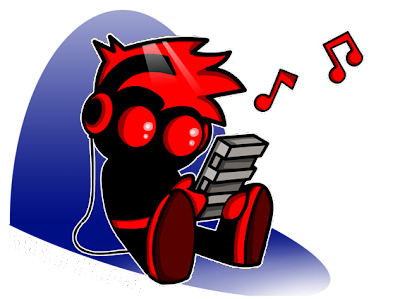 LET'S GET THE PARTY STARTED CAVEMAN STYLE... The Croods Deliver Some Light Family Fun For Everyone!!!

As a crowd-pleaser the DreamWorks animated caveman comedy The Croods offered some great family entertainment and it’s videogame counterpart, Prehistoric Party, tries to do the same using the tried and tested Mario Party formula of virtual board game and mini-game challenges. 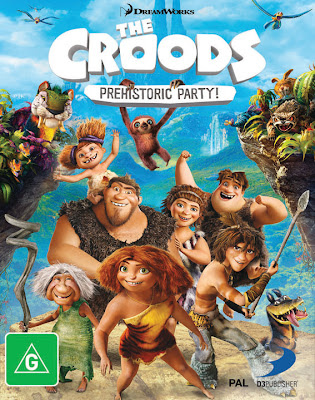 For the most part, The Croods: Prehistoric Party is quite successful, particularly as a family fun-night title, where even the youngest children can play along with their parents. The Wii U’s visuals are both colourful and vibrant, and do a great job of capturing the look of the film. 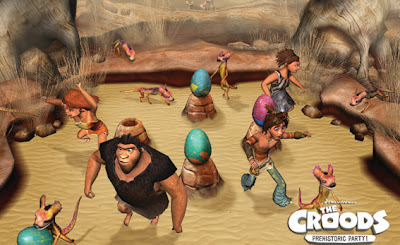 As you'd expect, this is a humorous romp through pre-history that sees players explore five unique game boards and compete in around thirty mini-game challenges. While some of the mini-games are a bit hit and miss, overall everything’s pretty solid, offering up Jurassic fun for all ages. 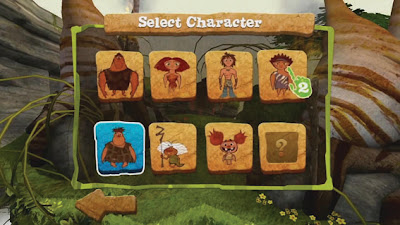 The dialogue’s pretty funny too, ripe with one-liners and caveman jokes, as it should be, since Game Guru himself, actually wrote the script. Will wonders never cease? Anyway, Prehistoric Party is light entertainment for the whole family and is best played in 4-way multiplayer! 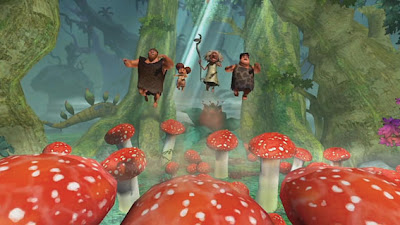 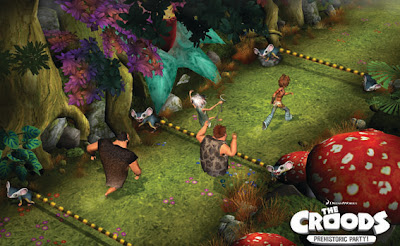 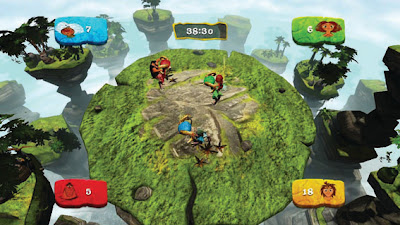 STUDIO GHIBLI MEETS POKEMON in NI NO KUNI... An Amazing Role Playing Adventure That Takes the Best Anime Has to Offer!!!

It's amazing how films and videogames are slowing coming together to create the entertainment of the future. Forget about dodgy movie-tie in games, and low budget cinematic snore-fests based on
videogames, we're talking about some of the awesome stuff being done, that goes light-years beyond any of that - a prime example, is Ni No Kuni!!! 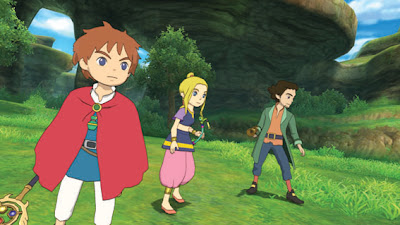 If you're a fan of anime, it's assured that you're already familiar with Studio Ghibli, who have created a slew of legendary animated films including My Neighbor Totoro, Howl's Moving Castle, Spirited Away, and Ponyo. For the first time ever, Studio Ghibili have collaborated with a videogame developer (Level 5), to create the cinematic sequences for a RPG (Role Playing Game) adventure. 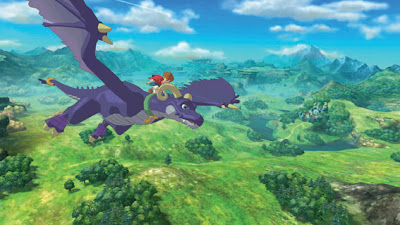 The result is an amazing experience that fans of Studio Ghibli’s films won't want to miss. Anyone that digs RPGs like Pokemon, the anime visuals of Professor Layton, or just Role Playing Games in general, will be blown away by what Ni No Kuni has to offer. 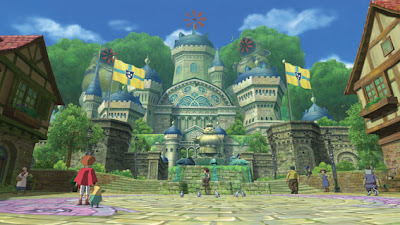 It’s an almost perfect game experience, which is gorgeously animated, has a great storyline, brilliant music (by legendary Ghibli composer Joe Hisaishi), and compelling gameplay. It’s the tale of Oliver, a young boy who embarks on a quest to become a magician so that he can resurrect his mother. 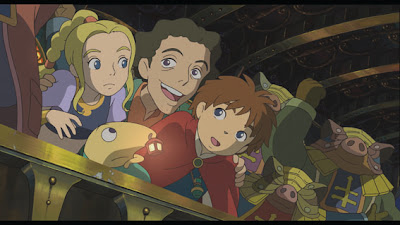 Oliver's jourmey takes him to a strange parallel world where he makes new friends and adopts many of the strange creatures he finds roaming the countryside. Once trained, they will become his allies in the many dangers he’ll face, including battles with all manner of monsters. 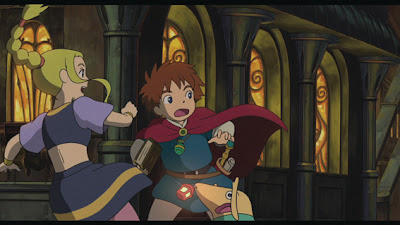 Ni No Kuni is a fantastic blend of cinematic anime storytelling, great gameplay, and characters that you really start to care about. It's extremely hard to fault  – brilliant stuff!

DO YOU FEEL A NEED FOR SPEED ON YOUR Wii U? Most Wanted U is Sure to Get Your Motor Running!!!

NEED FOR SPEED Most Wanted U

We've all been hanging out for Mario Kart to zoom onto Wii U and it's still a way off - come on Nintendo, we want our mega-dose of crazed karting now! 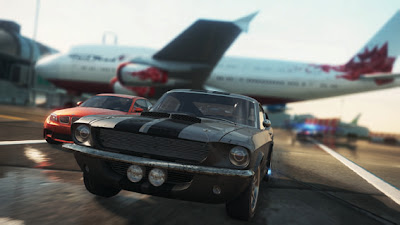 The truth is, there's really not that much out there for Wii U owners who have a hankering for racing and burnouts. Unfortunately, the Wii U is a bit lacking in this genre, so Guru thought he'd take a look-see at NFS Most Wanted U, which came out a few months back and is a ripper racing title to boot! 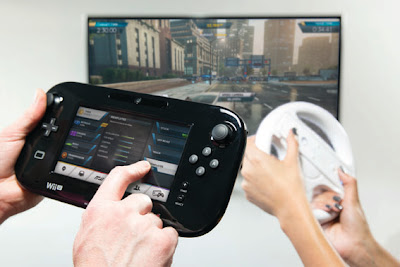 If you like your racing games to er on the side of arcade thrills, you're gonna go totally nuts over Most Wanted U. Currently, there isn't a more exhilarating driving experience on Nintendo's new games console. It may have taken little longer to get to Wii U, than the PS3 and Xbox 360, but it has been well worth the wait! 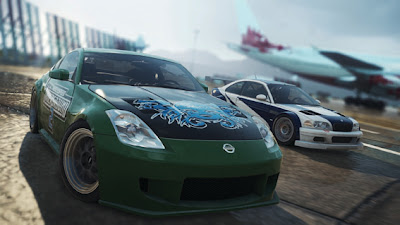 Most Wanted U delivers an expansive open-world to explore from the driver’s seat, and a bunch of cool new Wii U-centric features. One of the biggest highlights is the Co-Driver mode - a local co-op experience played using WiiMote or Wii U Pro Controller and the Wii U GamePad. 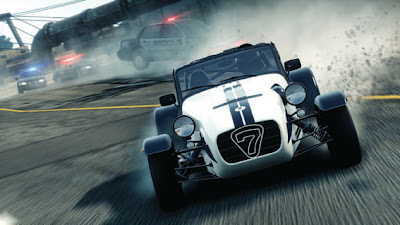 The Wii U version also includes, all of the extra content from the Ultimate Speed Pack DLC, and the ability to switch cars and mods on the fly, via the Wii U GamePad’s touch screen. All of this adds up to some awesome racing, so slam your pedal to the metal, and check it out! 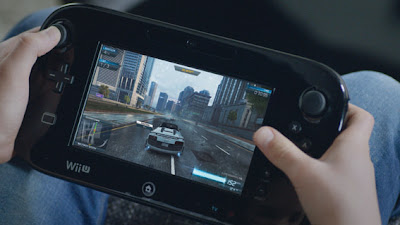 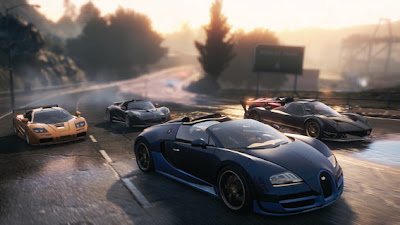 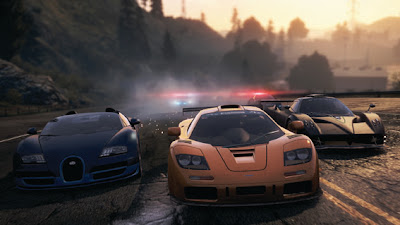