There’s only one thing as good as videogames when it comes to entertainment and that’s movies. It’s doesn’t matter if it’s on at the cinema in 3D, on DVD or Blu-Ray, Guru digs watching out for the coolest Flicks and Clips around.

If you wanna check out the latest Movie Reviews  or take a Sneek Peek at awesome Video Game Trailers, this is the place to be. You’ll only find the hottest vids, so you’re sure to see something you'll like... 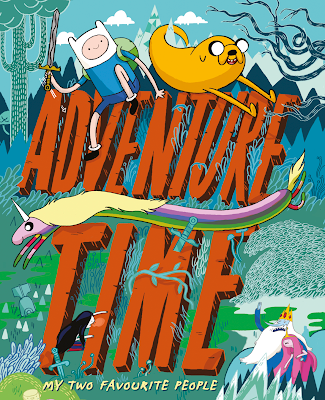 ADVENTURE TIME [Collection 1]: My Two Favourite People
DVD
121 mins
Rated: PGThere’s little doubt that Adventure Time tops Guru’s list of fave cartoons of all time! If you’ve even got a passing interest in videogames, you’re sure to get a kick outta the crazy adventures of Finn and Jake in the marvellous land of Ooo. A weird fantasy world where magic is real and the Candy Kingdom (which is ruled over by Princess Bubblegum) has subjects which are walking and talking sweets of the edible kind. The show is jam-packed with lashings of bizarre humour, wacky characters, and crazed storylines. 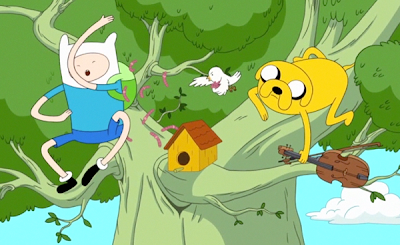 Speaking of characters, we have the hyperactive hero of the tale Finn (a 12 year old boy who wears a Rabbid hoodie) who throws himself into every adventure without thinking and his adopted shape-shifting dog sibling, Jake, whose magical morphing abilities are only matched by his mischievous nature, as the stars of the show. You’ll also meet sweet Princess Bubblegum, Lady Rainicorn, Cinnamon Bun, Marceline the Vampire Queen, Tree Trunks, LSP (Lumpy Space Princess), and resident bad guy the Ice King who can’t help himself when it comes to kidnapping princesses. However, the most memorable has to be Jake and Finn’s roommate (they live in a Treehouse), the nerdy jack of all trades Beemo (BMO) who’s all gadgets and techno geekery. BMO is a walking talking Game Boy, mashed up with a retro Mac and a bunch of ancient videogame consoles – the coolest character by far! 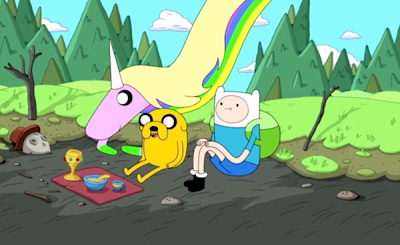 Created by Pendleton “Pen” Ward, Adventure Time started out as a short, which after doing the rounds was picked up by Cartoon Network and became an instant cult hit with kids, teens, and even adults! This isn’t your typical kid’s cartoon, and as a result, it shouldn’t be missed! Hugely influenced by Videogames and Dungeon & Dragons, Adventure Time is overflowing with pop culture references and quirky humour. Even the stories play out like quests from an ancient 8-bit Role Playing Game (RPG) like The Legend of Zelda, or one of those “Choose Your Own Adventure” and “Fighting Fantasy” game books - only a little more twisted. Random events keep viewers on their toes and the adventures all have a lunatic logic that makes total sense if you go with the flow. When you’re finally hooked, you’ll find it almost impossible to sit through any episode without cracking a smile. 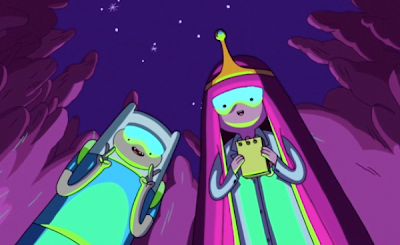 This is the first collection of episodes dubbed ‘My Two Favourite People’ and it contains 12 episodes on the DVD. Some of the Guru’s favourites make the cut including ‘Trouble in Lumpy Space’ where Jake gets accidently bitten by Lumpy Space Princess (LSP) and via Werewolf Rules catches the Lumps, ‘Slumber Party Panic’ where sugar craving zombies crash a castle slumber party and ‘Evicted’ which introduces us to resident goth-girl, Marceline the Vampire Queen. All in all, this is the perfect introduction to the exploits of Finn and Jake for the uninitiated and anyone who already knows the show, will probably want to add it to their DVD collection. Guru did – he just couldn’t help being a fanboy! In two words, Adventure Time is FREAKIN’ AWESOME!!! Be sure to check it out… 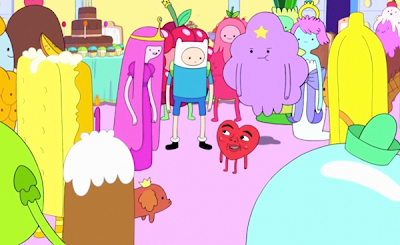 Also stay tuned in the coming weeks for Guru’s review of Adventure Time [Collection 2]: It Came From the Nightosphere.